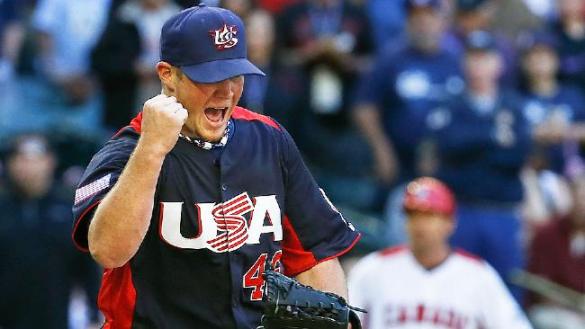 March baseball evokes very familiar feelings – a friendly atmosphere where fans are ecstatic to have the sounds, sights and smells of baseball back but couldn’t care less about the outcome. The World Baseball Classic is throwing a wrench into that normal Spring baseball vibe.

The WBC is far from the World Cup or Olympics but it does seem to be very important to these countries and that has led to some intense October-style moments. The tournament is onto its second round and it will feature some intriguing match ups. As I write this, Cuba and the Netherlands are locked in a 4-4 tie in the 7th inning. Loser goes home, while the winner advances to the Championship round. Both teams want to prove their worth to the international baseball community and the game is playing more like a playoff game than Spring Training.

That point was made obvious by the brawl between Canada and Mexico. The incident stemmed from a bunt single by Canada when it was already leading Mexico 9-3. Mexico hit the next batter and soon after both benches cleared. It wasn’t your typical baseball brawl either.

Punches were landed, players were wrestled to the ground and the fans even got involved by throwing drinks and baseballs onto the field. While this is never the type of scene you want to encourage, it proved the passion was present. Neither of these two teams advanced in the tournament but it’s safe to say that they were a part of the most talked about moment of the WBC.

Personally, I never liked the idea of retaliating after your opponent bunts for a base hit. Whether you’re trailing by a lot or have a no hitter in progress, the opponent always has the right to bunt to try and get on base. In this case, the WBC rules warranted it (run differential was a group tiebreaker) but that didn’t stop Mexico from taking offense to the bunt single. No matter what the rules (both written or unwritten), I believe a team can do whatever they want to reach base and they shouldn’t be hit a by a pitch for doing so.

If you don’t want your opponent to bunt, don’t fall behind by 6 runs. Or if you have a no-hitter, field the bunt and make the out. I don’t understand why pitchers and teams get mad about this. Bunting for a hit is difficult so if someone is going to try and do so, make the play and take the out. This is professional sports – there shouldn’t be unwritten rules based on the argument “well, you’re already up 6 runs.” No matter my opinion, these unwritten rules exist and this will continue.

As for the WBC, the quality of play throughout the tournament has been far from perfect but the games have been exciting. The motivation is definitely there, even for Team USA, who survived group play to advance to the 2nd round. Watching Puerto Rico, Dominican Republic, USA and Japan square off should make things interesting for the rest of the tournament. I still can’t wait for opening day but becoming so invested in the outcome of March baseball has been a welcome change of pace.