The Mega Millions jackpot has taken the world by storm.  #IfIWonTheMegaMillions is trending on twitter, random strangers on the subway promising each other $1 million is they win… it’s got the U.S. in a frenzy.  It is pretty amazing that someone is going to win $500 million dollars tomorrow – unless no one wins again, then it will be amazing that someone is going to will close to $1 billion dollars on the next drawing.

If my $10 investment miraculously turns into $500 million dollars, here’s what I do…

Such a cool animal.  I would create a cold habitat for it with some land and water like they have at the zoo. 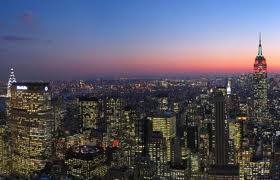 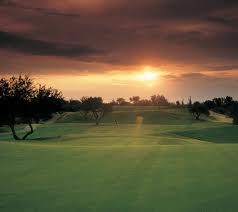 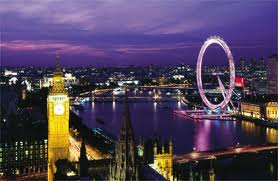 Look at those paradises.  I would consider my life a success if I owned a place in one of those places, even Tucson, but think about the possibilities with $500 million.  In the Caribbean locations, I would definitely need an infinity pool overlooking the ocean.

3.  Purchase a campground and pay all of my favorite music acts to come and play.  It would be a me-themed festival.  Think about how awesome it would be to have all of your favorite acts in one place regardless of genre, age or popularity.

4.  Even though I would be in millions of dollars of debt at this point, I wouldn’t stop there.  I would buy the New York Mets.  My favorite baseball team deserves an owner who isn’t an irresponsible ego-maniac.  I know I sound pretty irresponsible with the way I would spend my winnings so far, but when it comes to the Mets, I would be frugal, disciplined and focused.  1986 was a long time ago and we need some playoff baseball in Queens again. 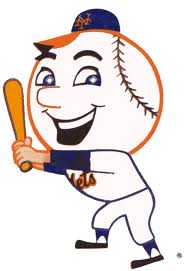 That should be enough to keep my busy.  Running the Mets and organizing music festivals of all my favorite artists to play for me while vacationing in my lavish homes, with my penguin of course. Hey, you never know.

Is there anyone on Earth more out of touch with reality than Madonna?  She has been in the public eye a lot recently with her over-the-top yet dated Super Bowl halftime show.  I was at the Super Bowl and trust me those type of performances play much better on TV.  It was entertaining simply because of the spectacle (setting up the stage in 8 minutes was impressive), but the biggest television draw in history should be going more modern – even if that brings the possibility of another wardrobe malfunction.

Along with the promotion of her new album, she found herself in the news again after an appearance at the Ultra Music Festival this past weekend in Miami.  She introduced Avicii who was headlining one of the nights.  I caught this introduction on SiriusXM and didn’t know it was Madonna speaking when she was introducing him.  Her intro went something like this… (paraphrasing here)

“House music has been a part of my life and career for the past 25 years… I’m thrilled to introduce one of the best electronic dance acts in the world right now.  How many of you are excited for Avicii? (crowd screams)  How many of you have seen molly? (louder screams)  Please welcome motherfuckin Avicii.”

Molly is a reference to a form of ectasy which is no stranger to electronic music festivals.  She was essentially asking how many people were on molly.  This remark really pissed off Deadmau5, another DJ performing at the festival. 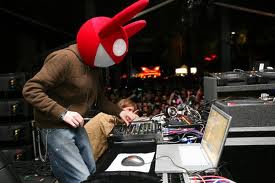 First of all when Deadmau5 is questioning your morals and motives, you have an issue.  Not to take anything away from him but he wears a mouse head.  Second of all, for Madonna to say she wasn’t referencing the drug when her new album title is MDNA (clearly a take on MDMA) is like the Mets saying they have money to go out and get new players – it’s a flat out lie.  The two have since settled their twitter feud with Madonna even scolding Deadmau5 for not handling this privately instead of on Twitter.  Either way, Madonna’s efforts to stay relevant has caused her to completely lose it.

Or, she’s a genius and has become even crazier than she always was for the publicity in order to stay in the public consciousness, in which case it’s Madonna’s world and we’re all just living in it.  I may even grab a copy of MDNA. 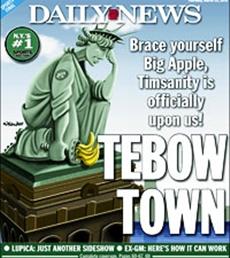 Pretty sure this is the only reason the Jets traded for Tebow.  Never seen a team more desperate for the back pages of the New York papers.  Clever back page, but now what?  The Jets can have all of the distractions that they want, basically creating a QB controversy out of thin air.  I can hear it now, the “Tebow” chants in the Meadowlands as soon as Sanchez has his first 3 and out.  Get all of the media attention in March you want, the Giants will be the ones playing and winning next January and February.

14 years ago, 2 quarterbacks were drafted first and second overall.  One rebuilt a city, was solely responsible for building a new state of the art stadium that would eventually host the Super Bowl, all while becoming one of the greatest quarterbacks of all-time.  The other amassed 36 interceptions in a 4-year career with 4 teams.  Of course I’m talking about Peyton Manning and Ryan Leaf and the decision that changed the courses of the Colts and the Chargers for the past decade and a half.

Had the Colts selected Leaf, professional football in Indianapolis is probably non-existent in 2012.  Both quarterbacks were under tremendous pressure and although their situations were far from identical, both franchises were in need of rebuilding.  Manning was the leader that the Colts needed and Leaf could not fill that role in San Diego .  Because of Leaf’s failure, the Chargers found themselves involved in another historic draft (for QB’s that is) in 2004.  They ended up drafting Peyton’s brother Eli and traded him to the Giants (at Eli’s request), thus securing Philip Rivers, who still works under center today.  The Chargers have made the playoffs 5 times since ’98 – all coming since ’04 with Rivers at the helm.   The Colts have made 11 playoff appearances since ‘98, won 7 division titles and won 1 Super Bowl. 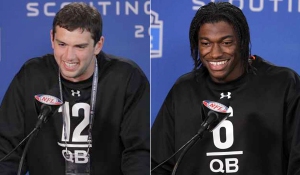 As history has before, it is about to repeat itself.  Next month, two quarterbacks will be taken first and second overall and two franchises will be defined for the next 15 years.  The Colts will select the most highly touted college quarterback possibly ever in Andrew Luck and the Redskins will be on the clock next knowing they will take Robert Griffin III.  Has there ever been more pressure on a pair of quarterbacks who haven’t been paid a single dime (naive assumption) to do what they do so well?  Luck has the task of replacing one the aforementioned greatest quarterbacks of all time and Griffin III already has to live up to the price of 3 first rounders that the Skins paid.  Both are being given amazing opportunities to cement their legacies as the next generation of great quarterbacks.  More often than not, greatness comes from opportunity – and I’m sure both players can’t wait to get their new jerseys and hats on draft day.

Personally, I don’t know whether one will be the next Peyton or Leaf or if both will be somewhere in the middle.  What I do think is that the most exciting part of it all is that only time will tell who made the right decision.  When Bieber turns 30 and the iPad is archaic as the typewriter, we will we know who’s decisions paid off and who wishes they can go back in time.  Fans everywhere will be there agonizing or rejoicing every step of the way – and I can’t wait to watch it all play out.

Everyone knows how important the first impression is… and here is my chance.  Luckily you can find just about anything on the Internet, including tips on how to have a memorable introduction.  So I figured I would get a little guidance on the art of the introduction.

First, the site suggests you should “Look at the person and make eye contact. This shows that you are directing your attention at them and are about to do something. Do not wait too long before moving onto the next step otherwise they may think you are strange.”

While this is not the best example because these eyes are actually very bad at keeping eye contact, you get the idea.  Now that we’ve established some degree of eye contact but hopefully not long enough so that you think I’m strange, it’s onto step 2.

The site continues “Once you have made eye contact, a smile is good (but not always necessary), and say “Hello” or “Hi”. Followed by “I’m Peter.” (substitute your real name). Whilst saying these words, offer your hand for a handshake.”

For our sake, I feel a Kramer half-smile fits the bill.

Now that we’ve gotten all of the formalities out the of way and we are properly introduced, I would be remiss not to let the inaugural post act as an actual introduction.  My name is Matt Finkel… I’m 22 years old and currently living in New York City.  For my entire life, I have been called “Fink” by everyone, including but not limited to my friends, peers, colleagues, acquaintances, friends of friends, friends parents, teachers, internship advisers, bosses, dentists, local pizzeria owners and UPS men.  I have a myriad of thoughts throughout the day spanning a variety of topics.  This will be where I will write those thoughts down – simply What Fink Thinks.