It’s Season 16 of Big Brother and I knew it was on but I always ignored it – until now. The first episode that I watched, which was in the middle of this season, was very confusing but I caught on quick. I’m so glad that I gave it a try because this show was made for me. I love Survivor and I knew it was similar to Survivor with players voting one another out of the game but Big Brother is so much better than I expected.

First of all, it’s played in real time, so the “house guests” are currently playing the game as I’m typing this. Yet the show is still edited week-to-week like Survivor with intriguing story lines to keep it from becoming boring.

Second, there are live feeds to watch the game at any time of the day. You can look into the house and see who is talking to who at any time during the day or night. Just as Ray Bradbury intended.

Thirdly, it’s on 3 days a week with live episodes mixed in with the edited programs throughout the week. It’s such a cool dynamic to be able to watch the season play out and get live commentary from the players involved.

Finally, there are three types of competitions. There are competitions to become the head of household and then the heads of households must nominate players to go “on the block.” The nominated players compete in pairs with the losers being eligible for elimination. But there is also a power of veto competition in which the players on the blocks can save themselves. Of course, alliances come into play and then each Thursday, there is a live vote for eviction where the house guests must choose between one of two players up for elimination. It’s definitely confusing but it calls for superior social strategy and physical ability.

The competitors are completely disconnected from the real world so while they are on TV, they have no idea how they are being received by the viewers. It’s a cast of good-looking, young, pretty goofy people that are cooped up in a ridiculous house playing a game for $500,000. Brilliant.

I love Survivor and nothing was surpass that as my favorite reality show, but I can’t believe that I just discovered Big Brother. The voting and alliances aspect would have been enough to draw me in but the real-time twist puts it over the top. America even votes on missions for the house guests to complete. I’m completely hooked now – time to go check out a live feed.

The Mets ended the first half of the season with an 8-2 homestand that seems to have reinvigorated their fan base just a little bit. A 45-50 record heading into the All-Star break isn’t that bad. Now we’re just 7 games out of 1st place, trailing the Braves and Nats. Unfortunately, prior to winning of 8 of 10, the Mets lost 8 of 10, including getting swept in Atlanta.

That’s been the most frustrating thing about this year’s team – we haven’t been able to string together a couple of good weeks. That homestand was the first time the team was able to build any momentum, evidenced a seaon-high 4-game winning streak and a sweep of Miami.

So we were finally playing good, consistent baseball and then the All-Star break interrupts. Not the best timing but at least it gives Mets fans a chance to feel good about the team without any threat of returning to our inconsistent ways. Starting tomorrow, we open up a 10-game road trip in San Diego. Everyone should be rested and ready to continue what we started over the past two weeks.

So could this be the time that this team turns it around and becomes serious playoff contenders? It’s unlikely given that the Braves and Nats sit tied atop the division and there’s a logjam in the NL Wild Card with 6 teams separated by 3 games. But this upcoming road trip can set the tone to play meaningful games in August and September, something this franchise hasn’t done in about 6 years.

We’re finally starting to play better at home (25-23) but our play on the road has diminished (20-27). That’s what makes this upcoming road trip so important. Terry knows that he can’t keep his job by clinging to mediocrity. We’ve battled injuries and once Niese returns from the DL, our rotation will be as close to what we hoped it would be on Opening Day. Dillon Gee is poised to continue his ascent as a strong mid-rotation guy, while Wheeler continues to improve and Jacob DeGrom has been a pleasant surprise.

I’m well aware that for all of this to come to fruition and actually play meaningful September baseball, a lot needs to go right. Aside from keeping up the strong play at Citi Field and maintaining above-average pitching, David Wright needs to return to form. Curtis Granderson and Lucas Duda need to continue their strong power hitting while Travis D’Arnaud stays hot and avoids reverting back to his pre-demotion form.

It’s a tall order that also requires a competent bullpen but like I said, that 10-game homestand has at least reinvigorated me. All year I was waiting for a win streak to build on and it finally came last week. Hopefully after some rest, we can pick up where we left off prior to the break.

If it all falls apart during the 2nd half like it has the last couple of seasons, then we become sellers yet again and hope for 2015. Luckily, I’m not thinking about that just yet. 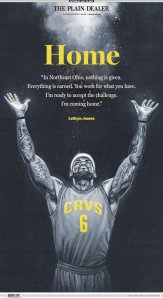 A 24-hour period in July was infinitely more exciting than any part of this year’s NBA Finals, including cramp-gate. Lebron held the sports world hostage while we awaited his decision for the 2nd time in 4 years.

Then at noon on Friday, the best basketball player in the world decided that he was returning to Cleveland, a championship starved city, and most importantly his home.

The resolution on where he would “take his talents” 4 years ago was not satisfying. It was public, selfish, immature and it breeded a legion of Lebron haters. Fittingly, yesterday was everything “The Decision” was not and it made a previously polarizing superstar into one of the most popular and well-liked athletes in the country.

Writing a letter as opposed to an interview and doing it on his own terms and not ESPN’s was a brilliant move. It seemed as if Lebron and his PR team have learned from their mistakes. Then the letter itself furthered that notion as it said everything that needed to be said. It was pitch perfect and there is no way anyone can criticize him for this move.

Home holds a special place in all of our hearts and A LOT had to happen for Lebron to return to Cleveland. It’s a perfect storm and the fans have embraced him yet again. Overall, it’s just a tremendous story that has to excite any sports fan.

The reaction across the sports world yesterday was fantastic. It was difficult to keep up with Twitter and Cleveland sports radio was a must-listen. 1964 was a very long time ago so yesterday was a huge day for that city. The Cavs are going to be a very fun team to watch next year with lots of young talent to complement a wiser, more mature Lebron.

When the news broke, I envisioned plenty of Lebron-themed “Coming Home” montages but Skylar Grey did me one better. She recorded a version of the song specifically for King James.

Very cool. The Decision 2.0 is over and the sequel was much better than the original. As the rest of the pieces of the free agent puzzle fall into place, Cleveland counts down to opening night when they can officially welcome Lebron back home.