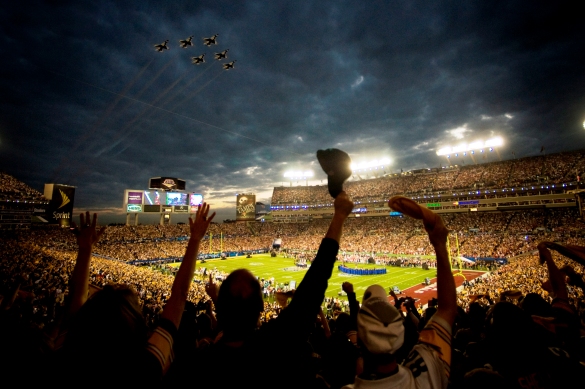 Sports fans have often said that there’s nothing better than hearing these two words: “Game 7.” It’s a statement that has rang true with series deciding games in baseball, basketball and hockey all producing amazing drama and garnering lots of attention. I love a great Game 7 as much as the next sports fan but there are two words that get me even more excited: “Super Bowl.” Lucky for me, we’re just three days away from this year’s national holiday that is Super Bowl Sunday.

There’s no doubt that the Super Bowl is the premier sporting event in the country. Everyone watches, whether you’re a fan or not, because it has become so much larger than a football game. It’s an entertainment show centered around a football game.  Celebrities, fans and media flood the host city to celebrate, attend parties and participate in the fanfare that surrounds the biggest game of the year. It’s not just the sports media either. CNN, Fox News, Accesss Hollywood and the music industry are all in attendance. It really is the grand daddy of them all (to borrow a phrase from college football).

If you’re not trekking to the host city, then you’re probably planning a Super Bowl party. With an abundance of food and drinks, your gathering will most likely be littered with hardcore NFL fan, casual observers and of course those there just for the halftime show or commercials. The one certainty is that no one is going to miss it.

For 3 straight years, the Super Bowl has set the record as the most viewed event in television history. Last year, 111 million people watched the Giants take down the Patriots, or maybe they watched Madonna, LMFAO, MIA and Cee-Lo Green perform at halftime or maybe just for the E-trade baby. No matter what they tuned in for, they watched because it’s the Super Bowl. It’s a spectacle that brilliantly blends sports and entertainment, thus attracting the largest possible audience.

Listening to the radio this morning, I heard morning show hosts discussing the Super Bowl. They all agreed that they did not care at all about the game, joking they didn’t even know who was playing. One person said he wanted to the Ravens to win because he liked animals. Another was discussing his plans, complaining that he was going to all of this trouble for something he couldn’t care less about. A third host echoed those sentiments but said she wouldn’t dare miss it because she feared not being able to discuss the commercials at Monday’s “water cooler” conversation.

This radio segment summed up everything about the Super Bowl for me. I love it for completely different reasons than the morning show hosts but at the same time I love it for all of the same reasons as them. I care about the football but I also love the fact that it’s a national event that everyone can share. The NFL has created the ultimate show – something that people are afraid to miss whether they’re interested or not.

I’ve always joked that if the NFL can make us tune in only for the commercials, then they can literally make us do anything. There are even hour long shows airing the best Super Bowl commercials. (I watched one last night). So that’s a 42 minute show of commercials with 18 minutes of commercials mixed in. What other event can produce something so ridiculous and still receive ratings?

Over the years, the Super Bowl has seemed to get bigger and bigger. The media coverage, advent of social media, unprecedented access to players and accompanying scandals along with controversial halftime moments and closely contested games have all helped elevate the Super Bowl into the stratosphere. It’s unlike any other event in the world (soccer fans may disagree) and it’s only going to get bigger.

Sunday will be a fun for a lot of reasons. The day is an excuse to get together with friends and family and watch the football season come to an extraordinary end. The coolest thing about it all though is that you know everyone else will be doing the exact same thing. Just like you, everyone will be in front of a television at 6:30 PM ET on Sunday night watching the same thing that you are. It’s rare that an event takes over the country like the Super Bowl does every year. For all of these reasons, the two words that get the sports fan in me the most excited remain “Super Bowl.”