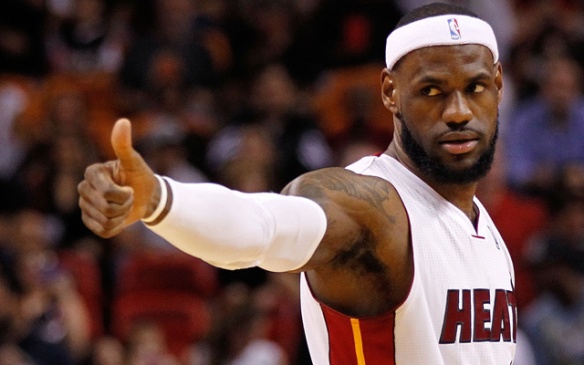 Many predicted that with the monkey of his first championship off his back, Lebron James would put up the best numbers of his career. What many didn’t predict is just how exceptional those numbers would be.

James has been producing in all areas of the game all season but in the last two weeks, he has taken his game to another level. He set an NBA record by becoming the first player to score at least 30 points and shoot at least 60% from the floor in 6 straight games. He only had 3 such games this season before the streak started.

The streak ended on Thursday when Lebron missed an unnecessary 4th quarter three as the shot clock expired, dropping his FG % to 58.3%. (He scored 39 points). He was clearly only concerned with winning the game and was not thinking about maintaining the record, which is the way it should be. James seems more mature and more focused – like earning his first title has made him crave another even more.

Lebron has scored at least 30 points in 7 straight games going into the All-Star break and he is more efficient than ever. During those last 7 games, he is averaging 7.4 rebounds and 6.5 assists per game on top of all the points. He’s also shooting 54% from behind the arc and 79% from the line during that stretch. Not surprisingly the Heat have won all 7 games.

The NBA has a lot of talent but right now if you had to choose one player to watch every night, it’s Lebron. You don’t want to miss what he does next. I’m upset the All-Star weekend is getting in the way of such a brilliant stretch of basketball.

7 games obviously doesn’t define a career. But he’s earned some extra attention this week, deservedly so, and the superlatives are flying around. He’s entering his prime and proving that there are very few, if any, limits as to what he can accomplish on a basketball court.

His game is as polished as ever. He’s shooting a better 3-point percentage than Ray Allen and his size continues to make him a threat in the post. James is essentially a point guard in a power forward’s body. The NBA has never seen anything like that and he can hurt you from anywhere on the court, making him virtually impossible to defend.

Most importantly, he is making the right decision all the time. He knows when to shoot and when to find an open teammate (which has led to high shooting percentages and high assist totals). He’s a superstar and a team player – that’s a dangerous combination. James has always had the ability to take over a game but he’s finally mature enough to deliver exactly what his team needs at any given moment.

Whether he will surpass Michael Jordan in greatness remains to be seen (it’s also a very subjective argument). Lebron knows that he needs at least 3 or 4 more rings to be considered the greatest of all-time. We can save those arguments for a later date though. Right now, as his Nike ad used to say, we are “witnessing” something special. I’m just happy to be along for the ride.