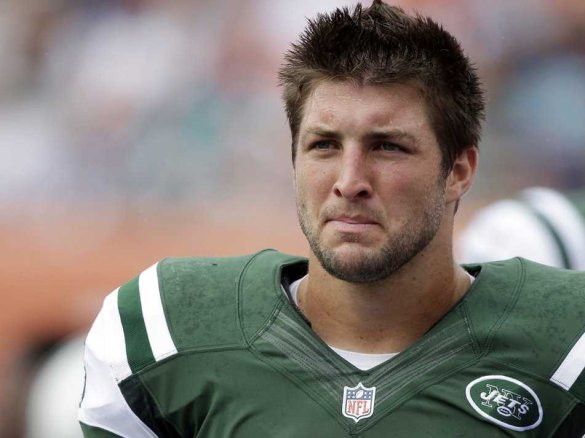 Tim Tebow is one of the most interesting and polarizing figures in sports history. He is constantly criticized and told he is not an NFL QB and yet he also has an army of loyal fans. Fans who helped make Tebowing the biggest thing in the NFL last season. He inspires with his constant positive attitude and religious devotion. Everyone has an opinion on the man who has started just 14 NFL games in his young career. He turned ESPN, the flagship sports network, into his personal network. They covered his every move because people cared. Eventually ESPN realized how excessive the coverage had become and dialed it back.

Tebowmania is nothing of his own doing but it took the nation by storm last season. Of course he is responsible for the phenomenon but he does not seek out the media attention like Chad “Ochocinco” Johnson or Terrell “Get your popcorn ready” Owens. The media firestorm comes with the territory when you’re Tim Tebow.

If you’re an NFL fan, then you’ve heard both sides of the Tebow debate more than once. For me, Tebow should not be dismissed until he is given a full season as a starter. He is so often diminished because he doesn’t throw the ball like Tom Brady. But is that the only thing that matters? Tom Brady has won a lot in his career so I can see how people think if you’re not like Tom Brady than you’re a loser. But there are multiple ways to win – as evidenced by Tebow’s collegiate and brief pro career.

Tebow was a phenomenal college quarterback at Florida. He set numerous records, won the Heisman Trophy and was a constant presence in BCS games, including winning 2 National Championships. Here’s a list (according to Wikipedia) of his collegiate records…

He accomplished just about everything that you can possibly accomplish in college football. The only problem was that he didn’t look like an NFL quarterback. He had a long throwing motion and left the pocket to scramble too early. Tebow did it with an offense that was designed for him – that worked towards his strengths. Despite all of his winning, awards and records, the common belief was that he would not succeed in an NFL offense.

People are free to form their own opinions based on what they see when they watch him play. And they did – there was no shortage of opinions. NFL people also formed their own opinions and one opinion that mattered was that of Josh McDaniels and his front office in Denver. They drafted Tebow in the first round (25th overall) and he set an NFL Draft record for jersey sales. The interest in his NFL career, his fans and his haters were all there from the start.

In his 2+ seasons in the NFL. Tebow has 17 career passing TDs and 12 career rushing TDs to go with 9 career INTs. He has also rushed for 989 career yeards and averages over 5 yards per carry. He has started 14 games in his career, completing 162 of 341 passes (47.5%) with 2302 passing yards, 822 rushing yards, 23 TD (8 rushing) and 9 INT in those 14 starts. The passing yards are low but he makes up for it on the ground. Here’s the backbone for everyone’s anti-Tebow argument though: He has a 48.1 career completion percentage. That simply won’t cut it in the NFL, or so I’ve heard.

When given his lone extended opportunity to start games last season in Denver, he went 7-4, led his team to the playoffs and won a playoff game. Until he gets a full season as a starter – and his first run of games as a starter has at least earned him a look – Tebow deserves a chance to lead a team.

That couldn’t happen this season because the Jets needed a publicity stunt. So, they took advantage of Tebow’s celebrity and sacrificed him, wasting a year of his career on special teams and holding a clipboard. New York never had any intention of playing him (things have gone bad enough and they have had more than enough chances). Given how many bad quarterbacks there are currently starting right now, Tebow would have gotten a chance somewhere else.

We will never know the answer to the Tebow question until he gets a full season to start. It looks like that chance is coming next season in Jacksonville. There are a number of bad quarterbacks out there right now and GM’s would be smart to take a chance on Tebow over their current unsuccessful signal callers.

Just because he doesn’t win like every other quarterback in the league doesn’t mean it’s wrong. He still won those games and maybe there is more value in having an average passer who can take off and run at any time. Isn’t that what Cam Newton is? RGIII? Griffin is probably the best passer out of the three but Tebow is not Ryan Lindley when he passes. He’s not overthrowing wide receivers by 15 yards or throwing balls more than twice the height on the intended target. The guy has proven that he wins. It shouldn’t matter that how he wins goes against conventional NFL methods.

If it happens that those wins came in spite of him instead of because of him, then I’m a fool and I’ll be the first to admit it. Until then, Tebow deserves a chance as a full-time starter. If nothing else, we know it will be entertaining.