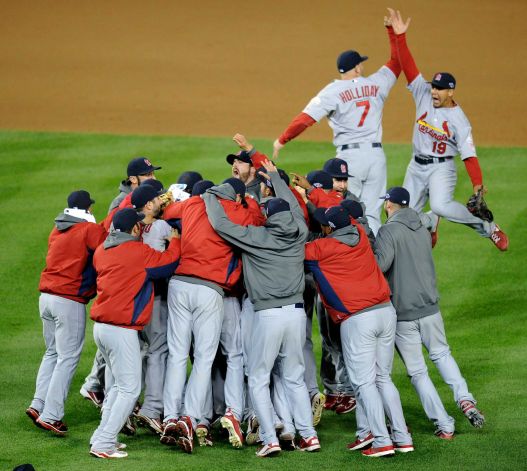 Last night’s Cardinals/Nationals game was a microcosm for the 2012 Divisional Round, complete with team’s fighting until the last strike, late lead-changes and crucial 10+ pitch battles between pitchers and hitters.  The Cardinals erased a 6-run deficit over the course of the game and a 4-run 9th inning secured their place in the NLCS for the 2nd straight year. All 4 series went 5 games and each Game 5 could have gone either way. The winning teams earned their champagne celebrations, while the losing teams no doubt had a bad taste in their mouth.

That bad taste must have been especially terrible for the Nationals.  After jumping out to an early 6-0 lead, they watched St. Louis chip away until the Cards got back to their old tricks and pulled off a historic comeback.  No team in MLB history had ever come back from a 6-run deficit in a winner-take-all game.  Fans at Nationals Park sat in their seats long after the game ended with their heads in their hands – in pure disbelief of what they had just seen.  Now the Nationals season is over and although they had a fantastic regular season and earned their franchises’ first playoff birth since 1981, the fans and team must turn their attention to next season.  An email season ticket holders received at 7 AM the next morning (about 7 hours after the game ended) didn’t make it easy for fans to turn the page.

World Series tickets!? Talk about rubbing salt in a fresh wound. The Nationals are going to be fine and may even make it to the World Series as soon as next season, but there’s no doubt it will take a little time to get over this loss. If you asked Nationals fans right now if they would rather be bad during the regular season and know they’re out of it or go out like they did this year, I think many would choose the slow death over last night’s surprise killing.  Before you win it all, teams usually go through this sort of experience it makes them extra motivated for next season.  I expect Washington to come back next year and be the favorites to win it all.  This year, they came up short to a team that knows it is never out of a game.

The NLCS features two historic franchises in the Cards and the Giants while the ALCS has a rematch of last year’s ALDS between the Tigers and Yankees. This postseason has already been superb as is, but I definitely expect some more classic games with these match-ups.  The last two World Series’ winners squaring off on one side and the 27-time World Champs taking on the 1st Triple-Crown winner in 45 years on the other.  And oh yeah there’s the winner of the NL batting title Buster Posey and the reigning AL Cy Young and MVP winner Justin Verlander involved in these series as well.  Like I’ve said a number of times during this postseason, what more can a baseball fan ask for?