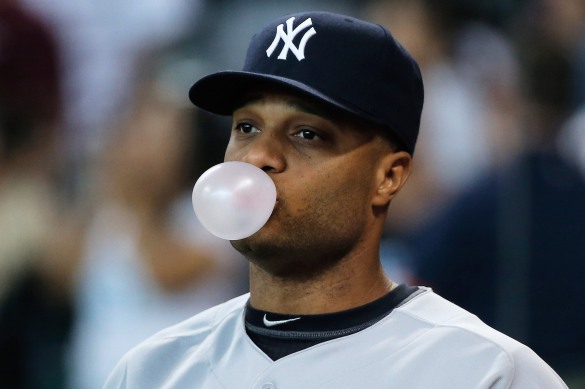 Reports surfaced early Tuesday morning that the Mets met with Robinson Cano’s people late Monday night. The free-agent second baseman is seeking a $300 million deal and it’s hard not to laugh when you hear that this meeting took place.

The Mets have made it clear that they are not  looking to get tied up in a $100 million contract this offseason, let alone $300 million. I guess there’s no harm in taking a meeting but I kind of imagine this one being a waste of time for everyone involved. It would be equivalent to me walking into an Ashton Martin dealership and discussing the Vanquish.

No one is serious about a deal here and I wouldn’t be surprised if the Mets held this meeting to try and give Cano some leverage over the Yankees. President Randy Levine said the team wants Cano but won’t pay him $300 million over ten years and now the question becomes, will anyone?

Cano is by far the prize of this free agent market but is he worth the largest contract in baseball history?  If one thing is for sure, it’s that the Mets are NOT the team that can give it to him. No other GM is nervous that Cano is meeting with the Mets and no one is taking this seriously.

It might excite some fans to hear that we are involved with Cano but let’s be real about our budget and live within our means. We’ve had enough trouble getting a meeting with free agent shortstop Stephen Drew – that’s where our focus should be. Hopefully Sandy can learn from what the Indians did last season and sign consistent veterans at reasonable prices to put together a winning roster.

As good as Cano is, tying up $300 million in one player is not the answer. Just ask the Angels how they feel about the $200 million they owe Pujols over the next 8 years, including $30 million in his age 41 season. So goes the offseason where headlines like ‘Mets meet with agents for free agent Cano’ are both laughable and valid at the same time.