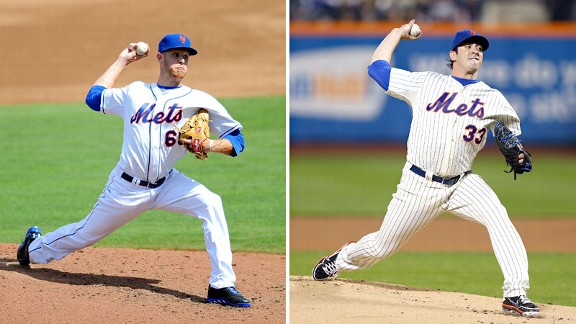 Today is a great day to be a Mets fan… and there haven’t been many so far this season (see previous post). The future of the franchise will be on display in Atlanta as Matt Harvey and Zack Wheeler will both take the mound in a doubleheader. Wheeler will be making his MLB debut in the nightcap while Harvey tries to continue his strong start in the afternoon. A lot of Mets fans will be watching, hoping a glimmer of hope for the future.

The Mets currently have 2 of the 10 best prospects in baseball (Wheeler is one; D’Arnaud is the other). The focus is solely on the future and making sure that we will have a contending team sometime in the next 2 seasons. Both Harvey and Wheeler are expected to be centerpieces of those contending teams (along with Wright and D’Arnaud). Getting to see both prospective aces pitch on the same day is promising and very exciting.

Last night, the Mets lost a tough one as Dillon Gee gave up a 2-run walk-off HR in the 9th (after an almost 4-hour rain delay). Gee was going for his first career complete game and I have no problem with Terry leaving him in – but sometimes you pitch 8 amazing innings, make one bad pitch in the 9th and lose the game. It didn’t help that the Mets only scored one run but Tim Hudson matched Gee pitch for pitch for most of the game. Gee has pitched well recently and I’ll take 8 shutout innings from him anyday. Also, the day before the Mets won a game that they had no business winning, scoring 4 runs in the 9th. It all evens out.

Wins and losses are the least of my worries at this point for the Mets. It’s all about the future and that’s why Tuesday’s doubleheader is so important. We know what Harvey is capable of and we’ve been told we have another Harvey coming up in Wheeler. Hopefully he delivers – can’t wait to watch.