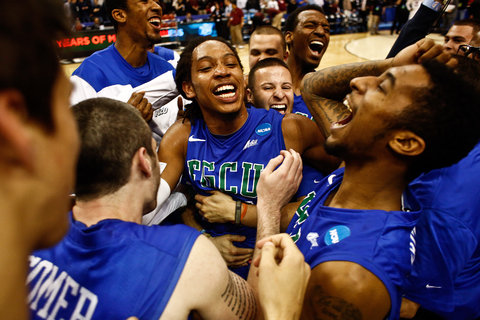 Florida Gulf Coast becoming the first 15 seed to advance to the Sweet Sixteen is just another example of why the NCAA Tournament is the best. It really is the best two sports weeks out of the year. The opportunity for these Cinderellas to come out of nowhere doesn’t exist in other college sports and it rarely occurs in the pros. FGCU has captured everyone’s imagination and the Dunk City Eagles are officially playing with house money.

The movie script is being written in real time. A Cinderella team led by a guy who just gave up his multi-million dollar job to coach making it’s first tournament appearance. The Eagles fast paced style of play combined with their ability to play so high above the rim makes them a must watch. That and the fact that they are genuinely having such a blast during the games. The bench explodes after every alley oop. Their upsets over Georgetown and San Diego State was exactly like watching someone crash a party they knew they didn’t belong at. They are the talk of the tournament and for good reason.

Next up is a showdown against Florida, their in state “rivals”  if you can even call them that. Gulf Coast tried to schedule a scrimmage with Florida before the season started but Billy Donovan declined. Now the two team’s will square off in what is likely to be the most anticipated Sweet 16 match up this year. The energy in Friday’s game will be electric and I get the feeling the crowd will be strongly behind Florida Gulf Coast – even in Texas. It’s hard not to root for them. Their story is truly amazing and I hope it doesn’t come to an end anytime soon.

Check out this pep rally they had at the school yesterday…

Friday night is going to be a lot of fun.