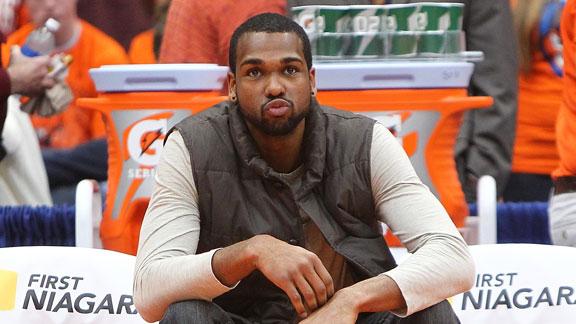 Jim Boeheim has already achieved two significant coaching milestones this season. On December 17th, he earned his 900th career win. 900 of anything is a lot. 900 wins is almost inconceivable. That type of milestone takes a lot of talent and a lot of time. 37 seasons to be exact and in that time Boeheim has become an institution – the face of the entire city.

Two weeks later, Boeheim made history again with his 903rd career win, passing Bob Knight and moving into 2nd place on the all-time Division I men’s coaches list. Now he trails only Coach K, who of course is still coaching and racking up wins himself. Syracuse basketball is a perennial contender thanks to Boeheim, his track record and the types of recruits he is able to attract. The only knock on him is the fact that he has only won one National Championship (in 2003).

Each year it certainly feels like this could be the year that Boeheim and the Orange add another. As a number one seed in the tournament two out of the last three years, fans had reason to be excited. 2012-2013 is no exception and all was well until Saturday when news broke that leading scorer and senior James Southerland was out indefinitely due to an eligibility issue. What was supposed to be a promising season highlighted by Boeheim’s milestones is now in jeopardy thanks to an off the court issue. Unfortunately this is becoming all too familiar of a situation.

Just last season, Boeheim was leading one of the deepest teams that he has ever coached. The 6th man on the team (Dion Waiters) would go on to be the number three pick in the NBA draft. All signs pointed to the Final Four as the Orange rolled through the regular season schedule, losing only one game. Then an off-the-court issue brought everything to a screeching halt.

Fab Melo missed three regular season games due to an academic issue and then was ruled ineligible for the NCAA tournament. Melo was a huge part of S-U’s success last season and helped the team earn it’s #1 seed. When the Orange fell to Ohio State (with big man Jared Sullinger) in the elite 8, it had every Syracuse fan thinking of what could have been. “Melo would have shut down Sullinger and Cuse wins that game easily,” was the general consensus and the whole season (which should have been special) left a very sour taste.

Once again, Syracuse is off to a good start and ranked in the top 10 this season. I certainly was looking forward to another great year that would ultimately end with the Orange living up to its full potential without the threat of eligibility issues. Then the Southerland news broke and every S-U fan had the same thought. “Not again!”

At least this issue came up a lot earlier in the season and Southerland will hopefully return for the home stretch. The timing of this setback is not ideal though. Syracuse is gearing up for a conference road game against Lousiville, the top-ranked team in the country. There’s no doubt that Southerland will be missed during this game. A victory could even propel the Orange to to #1 in the nation, especially with second-ranked Indiana losing at home to Wisconsin on Tuesday.

The bottom line is that it sucks that Southerland isn’t going to play on Saturday and it sucks that the this is becoming a recurring problem. The school did not release what the exact eligibility issue was related to but many surmise it has something to do with grades. Whatever the reason, I just hope this is the last eligibility issue in central New York for years. This team can do great things and Boeheim can certainly lead a team as talented as this year’s to a Championship – that is if they can all stay on the court.