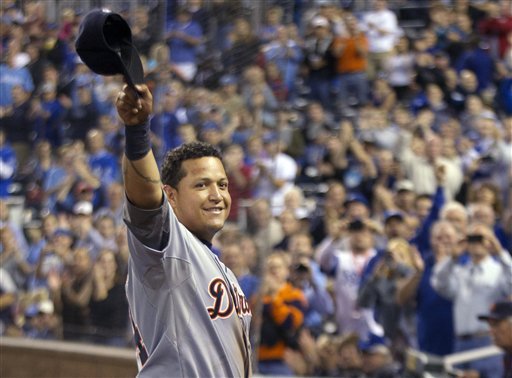 Miguel Cabrera won the AL MVP Award on Thursday and it wasn’t as close as the intense debates over the last few months made it seem. Cabrera received 22 out of 28 first-place votes (Trout received the other 6 first-place votes) but just because the writers gave it to the Triple Crown Winner in a landslide doesn’t mean the debate is over.

The arguments for both sides have been so much fun and the debate has sparked engaging and intelligent discourse on all media platforms. The fact that it really could go either way with both sides having very compelling arguments made it all the more interesting. Both Cabrera (age 29) and Trout (age 21) are young enough that these intense MVP debates can become annual occurrences.

Whoever won deserved it and it has been acknowledged that both Cabrera and Trout had remarkable seasons. I’m happy for Cabrera – I just believe that Trout was the AL MVP. I won’t rehash the reasons or statistics again here. Joe Posnanski does that much better than I ever could and you can read his take on the MVP aftermath.

There’s a million different what-if scenarios but 3 hits is so marginal in the grand scheme of a 162-game season. Trout not getting those extra 3 hits allowed Miguel Cabrera to win the Triple Crown, which in turn locked up the MVP. The history and mystique of the Triple Crown is noteworthy but it should not be the deciding factor.

One of Joe’s great points is that “Mike Trout could go on to become one of the greatest players in baseball history and still never have another season as amazing as this one.” It truly was a one-of-a-kind season. But a one-of-a-kind season doesn’t guarantee an MVP. Just ask Dwight Gooden. His 1985 season: 24-4, 1.53 ERA with 276.2 IP, 268 K, 16 CG and 8 shutouts. Gooden was just 20 years old when he put up those gaudy numbers and he finished 4th in the MVP voting that season.

I’m excited to watch Trout play for the next 15 years. There’s no doubt in my mind that he will continue accomplish historic things on the field – as will Cabrera. As for this season there were 2 fantastic seasons – and only 1 MVP winner. In my mind that MVP is Mike Trout.