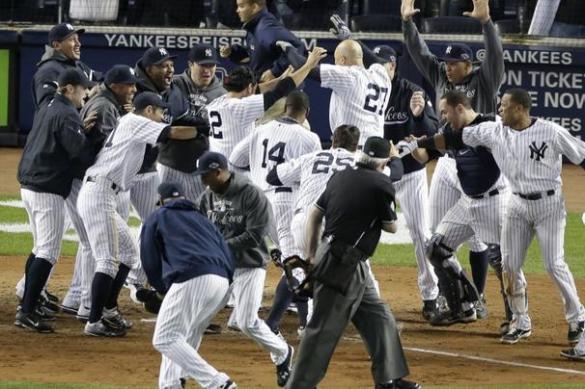 First the Yankees and Raul Ibañez putting on a postseason performance for the ages – a Kirk Gibson like performance. He came in cold in the 9th to pinch-hit for Alex Rodriguez (the $29 million, #3 hitter) and belted a game-tying solo HR.  Then, 3 innings later, he outdid himself with a walk-off no doubter to secure a 2-1 series lead for the Yanks.  The Bronx was alive last night and it was  joy to watch.  Surprisingly, I even enjoyed Sterling’s call.

Along with A-Rod being out of the game at the time of all the heroics, Derek Jeter was no longer in the game either.  He left due to a bone bruise on his foot in the 9th.  More credit to the Yankees for coming through with their 2 most iconic players on the roster on the bench.  40 year-old Raul Ibañez is reminding me of another “older” Yankee postseason hero. The last time the Yankees won the World Series, Hideki Matsui (age 35) won World Series MVP. The Bombers have had their share of postseason memories and Wednesday’s is the latest highlight to add to that long reel.

Later in the evening, the walk-off magic continued in Oakland.  Trailing by 2 runs in the bottom of the 9th, the A’s tied the game with a Seth Smith 2-run double and won it on a Coco Crisp walk-off single.  It has been a special season for the A’s and it was fitting that they extended it in dramatic fashion.  Completing the series comeback and advancing to the ALCS will be no easy task with Justin Verlander on the hill for the Tigers in Game 5.  But crazier things have happened in sports and I wouldn’t be surprised at all to see the A’s popping champagne with their fans on Thursday night.  I also wouldn’t be surprised if it happened in dramatic walk-off fashion.  It’s how they have done it all season, so why deviate from the formula in the postseason.

What a postseason it’s been so far and as I’m writing this Jayson Werth just hit a walk-off HR to force a Game 5 against the Cardinals.  Already 3 of the 4 series have gone 5 games and if the Orioles beat the Yankees tonight, all 4 will go the distance.  Every game has been entertaining, even the blowouts.  The close ones have been extra tight, littered with 10-pitch at bats and manager decisions to second guess.  The stakes are high and the players are answering the call.  Can’t ask for much more than that as a fan.  Maybe the league knew it was doing with this Wild Card and 2-3 format after all.