“I’ve got the best sleeper,” said every fantasy footballer at some point in the past 2 weeks. Every August, a skimming of a fantasy football article suddenly inflates everyone’s NFL-IQ to Mensa-levels.  This inevitably leads to a spike in intra-league shit talk (some of it funny and some wayyyy over the line). It’s fantastic because it all means one thing – the NFL is back.

You don’t realize how much you miss football until you find yourself cursing out a replacement ref for missing a holding call on a 4th string right tackle with three minutes left in a Bengals/Ravens preseason game (no rooting interest).  February to August is too long to go without the NFL. By the time camp starts, it feels like I found an ice cold Poland Spring bottle buried in the sand after a 100-mile trek through the Sahara. Over-indulgence is an understatement. So, with 10 days until the new season kicks off, who are the top-five fantasy players for 2012?

1. Aaron Rodgers (QB), Packers – Few players have the ability to single-handedly propel your team to the playoffs. Rodgers is one of them. In the last 2 seasons, Rodgers threw 73 TD and 17 INT (about a 4:1 ratio) and accumulated 8,565 yards. His completion percentage was over 68% last season and I don’t foresee any reason for him to slow down off that pace. If anything, his disappointing playoff loss to the Giants could ignite a fire and focus that yields an even better season. His undeniable talent and consistency make him option 1A for anyone trying to win a fantasy league this season.

2. LeSean McCoy (RB), Eagles – After back-to-back 1,000-yard seasons, he’s entering his prime and will be the centerpiece of the offense. He had just 1 fumble last season and when the Eagles unleash him, they win plain and simple. In his career, McCoy has had at least 20 carries in just 8 games (5 last season) and Philly is 7-1 in those games. He’s also had at least 1 reception in every game of the last 2 seasons. It won’t take long for Andy Reid and company to realize that 25+ touches a game for McCoy correlates to wins, which means more fantasy points for you. (That in turn, of course leads to bragging rights over friends, hot girls, extreme wealth and general happiness).

3. Ray Rice (RB), Ravens – I love the way Ray Rice runs. He can barrel over defenders just as fast as he can juke around them. 1200+ yards for 3 straight seasons and a career-high 704 receiving yards to go along with 12 TD last season. In a league that is seeing more and more teams split carries between 2 backs, the Ravens give all of their carries to Rice – and they would be foolish not to.

4. Drew Brees (QB), Saints – Coming off a record setting season, Brees is a fantasy machine (5,476 yards and 46 TD last season). He has too many weapons and we all know how much they love to throw in that offense. Bounty-gate and being without Sean Payton hurts his stock a little but it has also created an “us against the world” mentality, giving Brees an extra motivation. The players on the offensive side are unchanged so I expect Brees’ numbers to continue to please
those that own him. 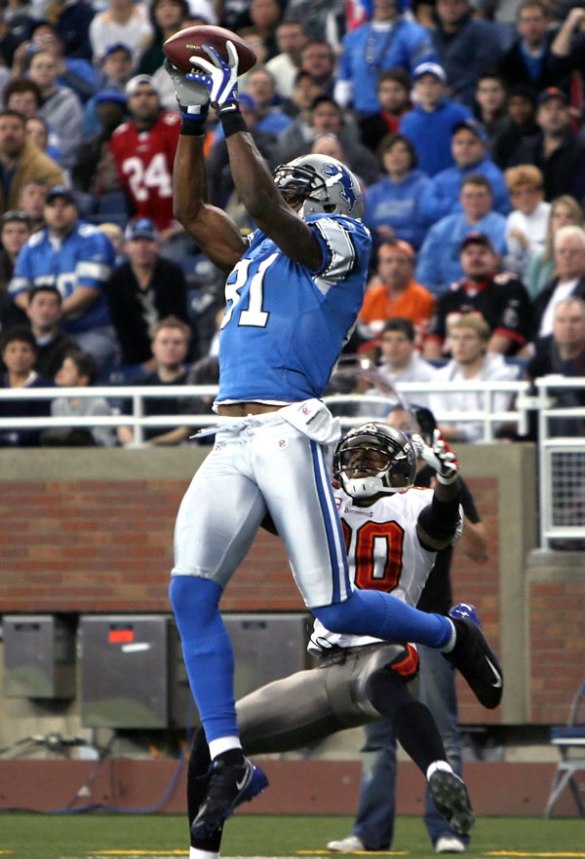 5. Calvin Johnson (WR), Lions – If you earn the nickname of a transformer and you play a contact sport, you’re probably a good candidate for a fantasy squad. 96 catches and 16 TD last season, 17.5 yards per catch and over 100 yards per game. The numbers speak for themselves but when you watch this physical specimen play, you know he is something special. Stafford has another year under his belt and they will continue to air it out in Detroit, meaning more catches, yards and touchdowns for Megatron.

Sleeper: Nick Toon (WR), Saints – No, I’m not talking about Doug, Rocko’s Modern Life or any other Nicktoons. This Nick Toon will appear on your television on Sunday afternoons and his ratings will be very high among fantasy owners. He’s a big, fast rookie with the ball skills to make a difference right away. It also doesn’t hurt that Drew Brees will be throwing him the ball. If a sleeper is someone who gives you 1st or 2nd round value but is drafted later, Toon is your uncle on the couch on Thanksgiving, about half hour after eating dinner.